Game of Thrones: “The Things I do for Love.”

Ankit Mishra 22 April, 2019
“The Things I do for Love.”
Wish Fulfillment, Big And Small
In the fifth-to-last Game of Thrones episode ever, Everyone prepares for war. That now includes Jaime Lannister, somewhat ironically, officially rivals Bran for most pronounced character graph. Few have changed as much as Jaime Lannister, and this episode highlighted that at every opportunity, from his apology to Bran, to his knighting of Brienne of Tarth.

Season 8’s 2nd episode was yet another build-up, anticipation and the promise of something monumental waiting just over the horizon. It’s not just the Battle of Winterfell we have to look forward to: Dany and Jon didn’t get to finish their conversation in the crypt, and that’s arguably even more important. It’s the story behind the story. 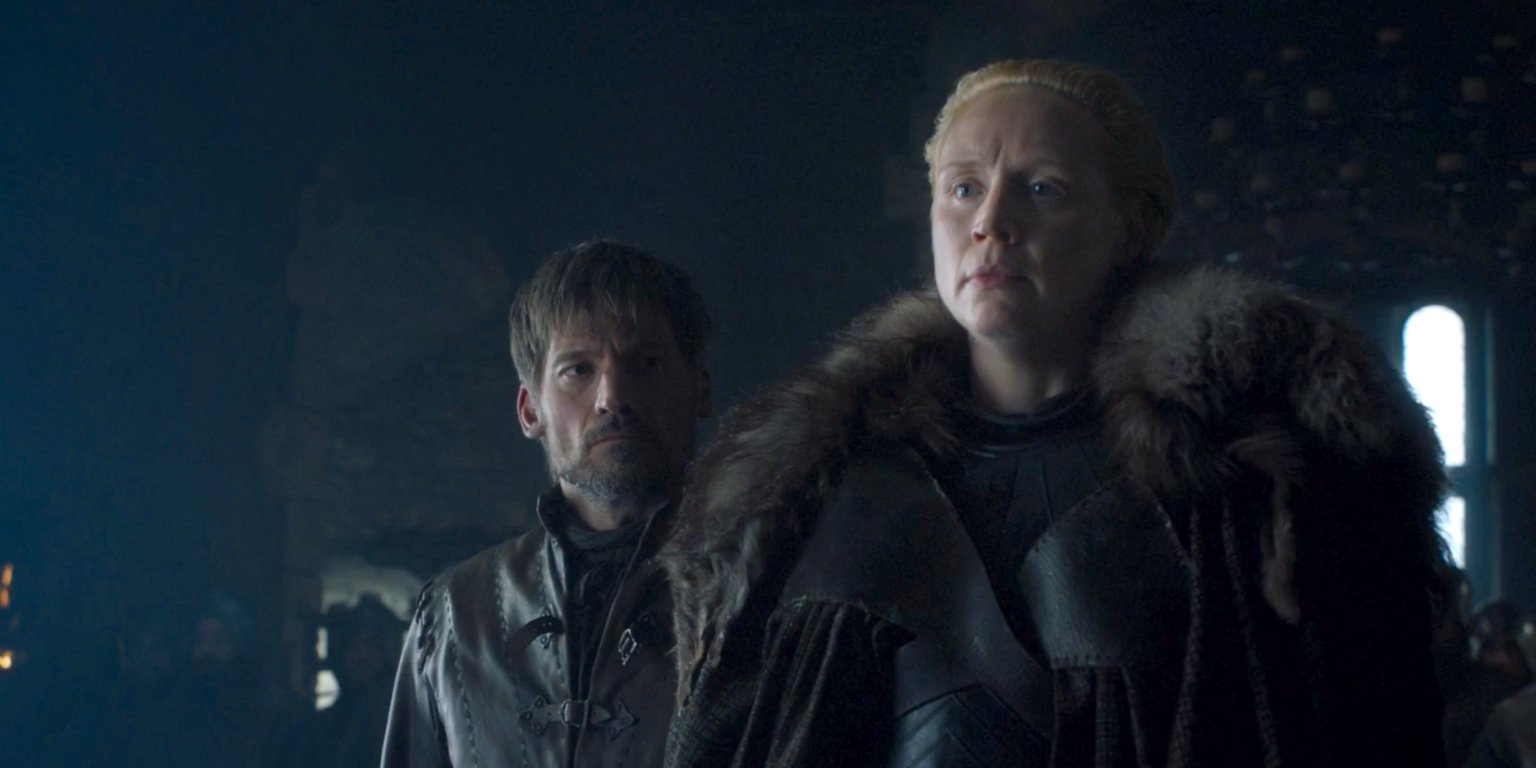 The episode opens with Danaerys confronting Jaime she talks about how he killed her father and is threatening, despite knowing full well that her father was a murderous psychopath who needed to be killed. She doesn’t trust Jaime, and that makes sense given his past. Sansa doesn’t either, but Brienne vouches for him and she relents. Jon thinks they need every man they can get. And Tyrion says he believes him also. Jaime reveals of Cersei’s Plans of no intention of helping them and has a massive army that can wipe them all out once the Night King is dealt with.
Hard-Headed Women in the North
Daenerys takes out her frustration on Tyrion despite having gone along with his plan without question herself. Later Jorah takes her aside in private and speaks for Tyrion. He also urges her to make amends with Sansa though that doesn’t go quite as well as she hoped. When they’re speaking the ice does begin to thaw, but then Sansa brings up the fate of the North, asking Dany what happens when she takes the Iron Throne. Khaleesi inclining towards the madness like his Father does not wish to relieve the North.

Arya constantly in pure badass mode. She’s so tough, she’s such a great fighter, she can throw daggers with deadly accuracy, she tells Gendry to take off his own bloody pants because . . . it’s better to be tough than romantic or sexy? I’m not quite sure. It feels a little forced. I miss the old Arya.
Of the three strong women currently moving and shaking things at Winterfell, the favourite is Sansa. She’s smart and practical, stubborn and eloquent. She’s a good ruler and would make an excellent Queen in the North. I also like the young Lady Mormont, who is always putting someone in their place, this time, her cousin Ser Jorah.

This episode also revealed some of the Night King’s motivations, which has been a question since the very first scene of the show’s first episode. Bran tells the White Walkers are heading south so the Night King can kill him. “He wants to erase this world, and I am its memory.” Sam concurs with it and says that there would be no history left about anyone and all anyone would know of is the night kings existence.
As we head into the final battle of Winterfell, a plan has taken shape: The non-combatants will cower in the crypts (which might not be so wise if the theory about the Night King resurrecting all the corpses stored down there turns out to be right) while the army of the living holds off the dead long enough for Bran to lure the Night King to the Godswood.

Reunions still..Theon is greeted by Sansa rather emotionally as finally, he is fighting for what he is a Stark, by upbringing. Tormund and  Beric Dondarrian arrive at Winterfell with the Nights watch.
‘One Wish Before Death’
The episode provided plenty of wish fulfilment for longtime Game of Thrones Characters and fans.
A Girl is Human
Arya actually getting together with Gendry was much anticipated but for me, it was a little eeky. Arya will always be a child for me so maybe I could not accept it.
Ser Brienne of the Seven Kingdoms
Jamie Knights Brienne, as we found out that a knight can knight another. Sitting around a fire crew of the show’s surviving characters: Tyrion (Peter Dinklage) and Jaime (Nikolaj Coster-Waldau), Brienne (Gwendoline Christie) and Podrick (Daniel Portman), Davos Seaworth (Liam Cunningham) and Tormund Giantsbane. Jaime knighting Brienne fulfils their relationship, although in a very different way. Brienne had inhibitions and denies any of such wish she has. but it all comes a full circle with Podrick’s valedictory nod. With characters present in the room make emotions run high.
At this point, Podrick starts singing, Jenny’s Song at the wish of Tyrion. The Song for me is everything about the episode, the dreams & death and it had an eeriness about it.  In the books, all we’ve ever seen of the song is one line: “High in the halls of the kings who are gone, Jenny would dance with her ghosts.” Florence + the Machine performed the song over the episode’s closing credits.
The song with Pod singing, plays over shots of some of our heroes and the people that matter most to them—Sam/Gilly, Theon/Sansa, Arya/Gendry, Grey Worm/Missande, and, finally, Jon/Daenerys—should make us very worried for our favorites, and for the people who will live to mourn them.
“My name is Aegon Targaryen,”
After Jon did his best the entire episode to avoid Daenerys, she finds him down in the crypts. He’s standing in front of Lady Lyanna Stark, and Dany muses about her brother, Rhaegar, and how she can’t reconcile the good man from the stories with someone who could rape Lyanna. “He didn’t,” Jon tells her. “He loved her.” And the truth comes spilling out. He tells her how Rhaegar and Lyanna were wed in secret, and how after Robert’s rebellion was successful and Rhaegar slain, Lyanna made her brother Ned swear to raise their baby as his own bastard in order to protect him from Robert and the Lannisters.
Daenerys doesn’t believe him. After all, it’s his brother and best friend who came to him with this revelation. The conflict between Jon and Dany–the one caused by her life’s only mission the Iron Throne, should be easy to resolve. Where their conversation ended, I can hear what should have been the next line in my head: “But I don’t want the Iron Throne.” For Jon to respond in any other way would be unlikely; he’s always been reluctant to accept power, and quick to give it up once he gets it. Jon probably does not want the crown despite having the best claim, probably making him a better ruler.
Leaving that resolution as an open question throughout the upcoming battle was a fantastic narrative choice. Dany has become annoying, lashing out at Tyrion and exhibiting an alarming unwillingness to consider any alternative to her absolute rule. More than one character has expressed concern that Dany is more like her father and if she goes full Mad Queen or does something extreme in the coming battles, Jon might take the throne for Honor!
The Episode ends with the arrival of the whitewalkers outside Winterfell, setting the stage for an epic Battle of Winterfell. The Jenny Song in my head and the cinematography the show makes me feel for the characters. The music sets up the stage for heartbreaks in the next episode. Some dreams will be shattered, some Men will be lost.. Signing off with the song as the episode does…
“High in the halls of the kings who are gone
Jenny would dance with her ghosts.
The ones she had lost and the ones she had found
And the ones who had loved her the most.
The ones who’d been gone for so very long
She couldn’t remember their names
They spun her around on the damp cold stone
Spun away all her sorrow and pain
And she never wanted to leave
Never wanted to leave.
Never wanted to leave.
Never wanted to leave.
Never wanted to leave.
Never wanted to leave. “
Life