An LGBTQ flash mob which was presented by SCRUFF and organised by Those In Need at Hauz Khas village broke the stereotypes around the community with the help of powerful messages and an even more powerful dance. 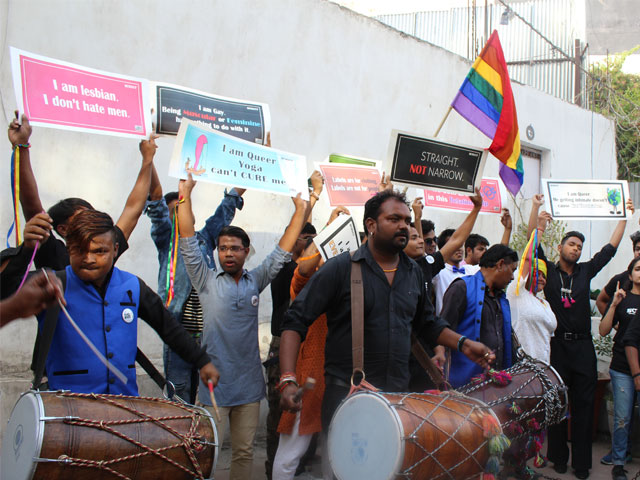 The members of LGBTQ community along with their allies came together on a Saturday evening to surprise everyone. The event started with a freeze mob in which the participants stood at different locations carrying placard against the usual stereotypes. Some of the messages said,
“I am gay. I love sports.”

“I am homosexual. And it’s not a choice.”

“I am Homosexual. I am not attracted to everyone of same sex.”

“I am queer. And I am monogamous.”

Some of the quirkiest ones said,

“I am homosexual. Me getting intimate doesn’t cause earthquakes.”

“I am Straight. Not Narrow.” 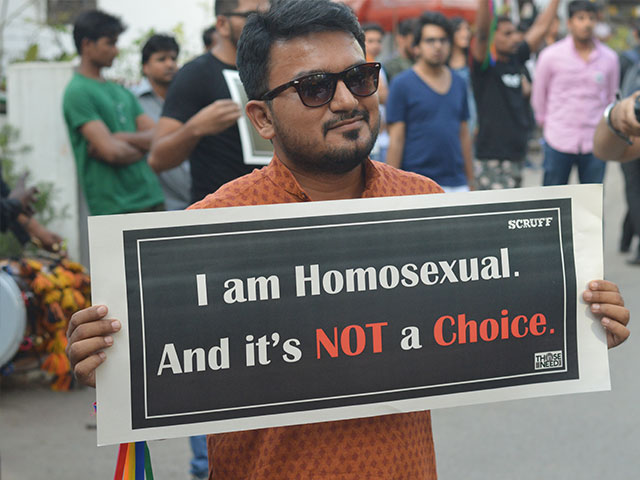 Soon after the freeze-mob, the beats of Dhol started which brought everyone together and the participants danced with joy along with an expression and strong sense of pride. Towards they end, the atmosphere was filled with positivity, emotions and the crowd around merged with the participants and danced their hearts out.

The event ended with a large banner with a message saying

“We are here. We are Queer. We are not a stereotype.”

After the dance, participants shared their own experiences with everyone and talked about how a positive change is coming gradually but steadily. Some of the participants shared how their parents now accept their kids the way they are. The dancers were fearless and confident and interacted with the crowd and also answered their questions about general myths and stereotypes. The crowd around was also brimmed with happiness to see an event like this happening in Delhi.

SCRUFF is one of the largest LGBTQ dating apps, as well as a travelling guide and social network. Originally targeting gay men, SCRUFF has become an example of the most inclusive and diverse platforms worldwide. Miguel Moscoso, International Marketing Manager SCRUFF, the person in charge of Indian initiatives said:

“By bringing this flashmob to Delhi, we would like to remind everyone in India that the local LGBTQ people are supported and united with the rest of our community worldwide. We are happy to have this opportunity to show the beauty of non stereotypical colours and diversity. It is a delight that we could pass the message in the most vibrant way we could.”

Abhishek Saini, who is the co-founder of Those In Need said,

“It was a complete pleasure that we could put this together and all the credit goes to all the dancers who worked so hard with us. With intend to do more such events and hope that a truly inclusive society is not really far away.”

Those In Need is a Not-For-Profit organization child of Lending Hands Foundation – which has as mission to work for the welfare of minorities. Through civil society engagement, volunteers support community development by organizing resources and obtaining an effective response,.  Those In Need provides a network platform to various NGOs, volunteers, educational institutions and others to maximise the impact of their philanthropic efforts.